Posted on December 20, 2015 by jvcarrwriterauthor 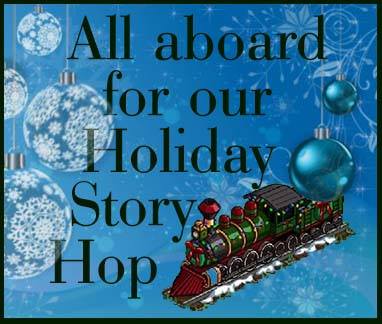 I wrote this in honor of my father and all the departed, those whom we’ve loved and lost. May we feel their love and close proximity this holiday season.

Thanks, Tim Hemlin, for hosting this super fun Christmas hop! For 11 more entertaining holiday stories on this hop, click here:-)

Fay stirred the creamy yolks in the fry pan on the stove absently, lost in the ache she felt in her heart each year. She looked forward to the holiday season with hope but couldn’t quite shake the family tragedy that had happened to her family three years ago. Her father, Theodore, had been driving her seven-year-old son, Timmy, to the mall for some Christmas shopping and a movie, when an eighteen wheeler truck hit them head on. They both died on impact.

Fay glanced down at the eggs and quickly pulled the pan off the stove. She sniffed. There was a faint burnt smell but not too bad, still good enough to eat.

Fay placed the pan back on the stove and smoothed her palms on the side of her jeans. “It’s not a yucky smell. See?” She sniffed. “Mmm. Smells delicious.” Fay couldn’t help but smile at little Emma with her morning hair poking out, her soft cheeks still pink and warm from sleep. For a child who’d lived only a mere five years, she was astute and perceptive, though she didn’t remember the tragedy; she’d only been two at the time.

Fay scooped up a pile of eggs, plopped them onto a small plate, and added a little salt and pepper. She took a fork out of the drawer and placed the plate in front of Emma, where she was sitting at the kitchen table.

Emma took a bite and put her fork down. She looked up at her mother, and said excitedly, “What are you going to read to me today? What Christmas story, Mama? Which one?”

Fay had carried on a family tradition, one her father had started with her when she was a child––they’d read a different Christmas story each day, for twelve days in honor of the twelve days before Christmas. Fay had already read enriching stories to Emma about how African-Americans celebrated their heritage during the holiday known as Kwanzaa, how the Jewish celebrated Hanukkah, and how various countries celebrated Christmas a little differently. They’d read happy Christmas classics like ‘Twas the Night Before Christmas and scary ones like The Grinch Who Stole Christmas, but little Emma’s favorite was Santa Claus is Comin’ to Town, the book Fay had picked out for this snowy, chilly morning.

After Emma had finished her breakfast and washed her tiny hands, they settled in to read. Fay gazed out the window, through the half-open blinds at the passing cars inching along the icy road. It was a true winter blizzard outside. She was glad she didn’t have to drive in the treacherous conditions.

Emma settled down next to Fay on the leather couch, cuddling under the cozy, tan knitted blanket. She leaned her head against her mother’s arm and smiled a happy, sweet little smile. Fay opened the picture book and began to read.

She’d only read a couple of sentences when Emma interrupted her, pointing to the beautifully illustrated Santa Claus on the page. “Oh, Mama, I saw him last night! I forgot to tell you. I saw Santa!”

“How nice,” Fay said, smiling to herself at her daughter’s innocence. “Did you have a dream about Santa?”

“No, Mama. I saw him in my room, next to Teddy.” Emma had always kept a huge Teddy Bear next to her bedroom door to keep the monsters out of her room. He was the soldier who protected her from her ghoulish childhood fears.

Fay smiled warmly at Emma, and curled a few strands of Emma’s golden locks around her ear. She played along with Emma’s story. “So you saw Santa, huh?”

“Okay, then. What was he wearing?”

“Well, red, of course, Mama. Santa always wears red.” Emma’s face pinched up like she was thinking her Mama should have known better. Then Emma paused to think before she continued to describe him. “Except he had jeans on, and I could see a little brown hair under his white hair. And he was real nice.”

Fay’s mouth opened in surprise. Jeans and brown hair brought her back in time to her own childhood memories. “Did he say anything?” she asked.

“Oh yes,” Emma said. “He said our family in Heaven is happy, and we should be too.”

Fay shook her head, confused, closed the book, and cradled Emma’s tiny head in her hands. “Honey, is this a story you’re making up?”

“No, Mama.” Emma said, pulling away from her mother’s fingers, staring at the Christmas book. “Awww, can’t we keep reading?”

“Hold on one minute.” Fay stood up and walked to the ebony hutch in the dining room. She ran her hand along the wooden drawers, until she came to the drawer where she kept old family photos. She opened the drawer and shuffled through them. She came to the one she was searching for. She pulled it out, closed the drawer gently, and brought it back to the living room, where Emma was waiting for her. She handed the picture to Emma. “Have you ever seen this picture before?” she asked her daughter.

Emma cried in delight. “That’s him, Mama. That’s him.” She peered up at her mother curiously. “So, You’ve seen him, too?” she asked.

Fay felt her eyes burn with tears. She blinked them back. “That’s Theodore, my father, Sweetheart. Your Papa when he was young.”

Fay nodded. “No, he isn’t. You’re right, but when I was a little girl like you, he used to dress up like Santa, and read to us about the magic of Christmas.”

Emma cocked her head to the side, and looked deep in concentration. “Well, Mama. If I see Santa Claus tonight, I’ll rip his white beard right off that face of his, and let him know he’s not foolin’ me.” Emma sat back and crossed her arms with a look of triumph. “Now that we figured out that Papa’s been playing dress up in my room like Santa, can we finish reading now?”

Fay laughed and hugged Emma tightly, and then opened the book, amazed at the sweetness and simplicity of her child. She knew in her heart that a little more healing for her family would be the most special gift this holiday season.

Hope you have a happy and safe holiday season!

Everybody has realistic dreams, ones that start with a seed in the heart, are watered, then grow. Well...I finally published my dream, my young adult novel entitled Username: Bladen. The idea to write it literally struck me in the darkness of the night. I began this project not too long ago, though now it feels like forever. This book, in its original manuscript form, meandered down a typical publishing path in many ways, until it recently settled (Yay!) on the shelves of cyberspace. Soon, I hope it will find a happy home on the shelves of many book lovers, in a real home not just a virtual one. After all who doesn't like to see their dreams come true? Today, with the technological advances that we enjoy, dreams of publishing are well within a writer's grasp. Every mom, much to their chagrin, experiences sleepless nights. With six kids, I honestly can't remember the last time I slept through the night. Typically, when I wake up and can't fall back to sleep, I think too much about things, meditate, or pray. One night as I was praying, the plot for Username: Bladen literally flooded my thoughts. I got so excited about it that I decided to sit down and write and write and write. I spent a lot of time learning about publishing. I joined forums and writers' groups. When I finished my manuscript, I entered it into The Sandy Writing contest, which was a terrific learning experience. I didn't win, but one judge loved my story and gave me almost a perfect score. That gave me a lot of encouragement. I also queried it a little, and am amazed by how much I learned and loved the process. I know nobody likes rejection letters, but I appreciated the personal letters I received from agents that gave me insight into why they rejected my manuscript. Then finally, after I learned that publishers don't have a lot of shelf room for young adult novels with a male protagonist, I decided to stop querying and publish through Westbow. I found an extremely talented editor, and rather quickly finished the process of publishing my book. I couldn't be happier with the final result. If anyone has a story to tell, are willing to be diligent, and have a dream to be a published author, you can do it! Believe in yourself and make your dream come true!
View all posts by jvcarrwriterauthor →
This entry was posted in Uncategorized and tagged #christmas, #hanukkah, #holidayseason, #kwanzaa, #santaclaus, #StoryHop, #writing, reading. Bookmark the permalink.